Cross-functional projects, canal runs and the buzz of the city center

Arm opened its Manchester office at 11 Portland Street in February 2018, bringing together its existing Manchester team with the long-established group from nearby Blackburn.

Arm occupies two floors of the newly-refurbished city center building, and since 2018 we have expanded rapidly increasing from 80-90 people to over 350.

It’s a modern office that’s open and spacious, with lots of natural light. Generous communal areas are large enough to fit plenty of people, but not so big as to feel overwhelming.

And we have a fish tank, where all the fish have been named.

Portland Street is unusual for an Arm office, in that it’s right in the center of the city. In fact, it’s right next to Manchester Piccadilly station, in one of the city’s most bustling hubs.

It’s close to lots of bars and restaurants, and just round the corner from the Manchester Art Gallery – while Chinatown, the Gay Village, and the lively independent shops and cafés of the Northern Quarter are within a short walk. And for a daily dose of watery views, or a lunchtime run, one of Manchester’s historic canals is just two blocks away. 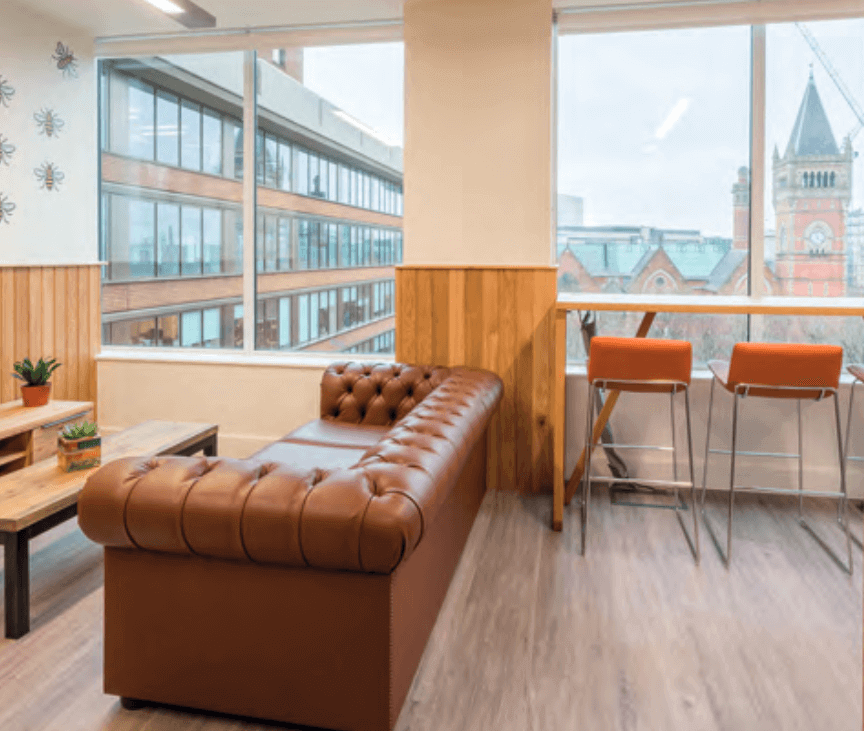 Manchester is one of Arm’s hub locations, so is distinctly cross-functional but with an engineering focus. Teams in Manchester are working on everything from developer tools and image processors for cars, teleconferencing and drones, to open-source software support and automotive GPU.

There’s no on-site canteen, but a busy shared eating area, ‘The Mill’. For those looking to eat out or buy food to bring back, you can take your pick: from ramen to burritos, fast food to health food – the nearby Northern Quarter has a great selection of independent food outlets. The nearby Manchester Arndale shopping center also houses plenty of independent cafes and restaurants as well as chains. And we’d be remiss if we didn’t highlight our office coffee machine: it’s excellent.

As well as running along the canal, lunchbreaks can also include exploring the shops, popping into Manchester Art Gallery, or some people go to the nearby Buddhist center for meditations. The ukelele club takes over a meeting room every Wednesday and plays for fun.

“In one room, the colors and walls make it look like a computer chip. Another is jungle-themed, with a water feature and (fake) lion. There’s a sci-fi/ space room, and another that feels like an old library, intended as a quiet space to work.”

Arm embraces flexible working. You’ll find many people who only use the office part time, some who start at 8am while others at 10am. Some structure their days around childcare and others find the local gyms are quieter mid-afternoon.

The Manchester office has a very friendly, positive, energetic feel. The social committee organizes summer parties and Christmas quizzes, and teams also host ad-hoc pizza and poker nights. With a pool table and table football on site, we never go too long without a tournament. There are also frequent cross-team after work socials at nearby pubs and bars.

Team Arm – where team members can raise funds for charities and volunteer their time and skills – presents great opportunities to get involved and give something back to our local communities, and to the wider world. These include projects to inspire young people to study STEM subjects, and providing people from minority groups with access to resources and empowering them to strive to achieve. Manchester people also give their time and skills to help others through our partners like Uptree, Princes Trust, UNICEF, Movember foundation and micro:bit foundation.

Beyond the bold reception area, which makes it clear you’ve entered Arm, we make subtle use of Arm imagery and its color palette throughout the office. We have a number of sit/ stand desks, and a lot of themed rooms. In one room, the colors and walls make it look like a computer chip. Another is jungle-themed, with a water feature and (fake) lion. There’s a sci-fi/ space room, and another that feels like an old library, intended as a quiet space to work.